It was a nice turnout for the first trip of the season we had some of our good regulars on board which was a good thing because if it was there first time fishing with us they were probably thinking this guy sucks. Anyway the fish finder had good marks but all we could get was one Striper. The boats that were trolling in the area were picking right away at the Stripers.From what I heard from the rest Party boat fleet it was a overall condition today and we got lucky catching the one. We tried bait we tried jigging we tried anchoring and we tried drifting I did all I could do, but I could not make them bite 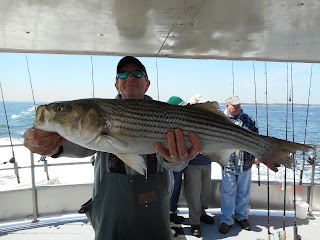 . The fish are there for sure they just gotta turn on. The one we did catch was on a shad while drifting. Tomorrow is a new day and we will be back at it. The weather looks good for the weekend and you wont stand a chance of catching one if you are home on the couch.
See you soon, Capt. Rob
Posted by Captain Rob at 5:54 PM