The way the weather looks for the next five days we will not be going anywhere. As much as I hate to throw the towel in I think it's time. It seems like every year our Striper season gets shorter. This was without a doubt the most frustrating  fall run I can remember as far as Striper fishing goes. The smaller fish showed up a little later than usual and when they did they were very hard to catch. We finally started catching them good the past two weeks, but it was a little too late as there weren't any big fish mixed in. The big Stripers really never made a good showing.We had a few different times that we did catch them and looked like it was going to start, but the next day they were nowhere to be found. All we can do now is hope for a good spring Striper run, and also hope the state doesn't screw us too bad. One thing for sure is they want to give us a 25% reduction with the Stripers. I'm not sure how they are going to do it, but there is talk that NJ may keep the bonus program going.That would still keep us at a two fish limit in Jersey waters, and as far as Fluke goes who knows if any new regulations will be put in place. Anyway as sad as it is to say the 2014 season is over for us.
On behalf of myself and the crew we would like to thank you for coming down and fishing with us.It is very much appreciated. I hope you have a great holiday season and a safe and  healthy winter. Hopefully spring will get here quick.
Thanks again, Capt. Rob 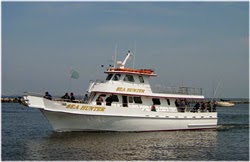 We had a very good morning bite today with the short Stripers. There was plenty of bird life rite from the start with good action, Plenty of rod bending but no keepers. About 11:30 All the life vanished all over and that was it they were done eating. We are going to try and get a couple more trips in weather permeating. Tomorrows weather looks good. I had one call so far for tomorrow if you plan on coming down give me a call so I know about how many people want to go.I don't want you driving down if it looks like we are not going to  have enough people. I will post tonight by 8:00 how it looks for tomorrow. Thanks, Capt. Rob
Posted by Captain Rob at 3:19 PM

We had good action again today with the short Stripers. No keepers a couple that were close. The bite started slow but picked up around 9:30 at the end and the change of tide. The bit very good for a few hours then it went down to a pick at the end of the day. All in all a nice day. We will not be fishing tomorrow because of the weather we may fish Wednesday if there is enough interest. There will probably be a roll from Tuesdays winds. but we will be able to fish.. Give me a call if you are thinking about coming down on Wednesday. 732 291-4468. Thanks Capt. Rob
Posted by Captain Rob at 4:12 PM