The Bluefish just keep coming. Ive been trying to stay away from the Blues the past couple days but there is no escape. Our whole bay is loaded with them. We did manage one nice Striper today. If your looking for action these big Blues will give you a hell of a fight and there are plenty of them.I am still hoping for some good Striper action.I know they are around it sounds like daybreak some boats are hitting them but them on the Bunker but its short lived then the Blues take over.We have been using fresh bunker since last Tuesday that's what we used and had that super day with the big fish.. Some boats are using clams but we have been catching just as many and most times more Stripers on the fresh bunker. And the Blues are hitting the clams just as hard as the bunker. I had a few calls for tomorrow its suppose to blow pretty good out of the North West around 30 knots. We will have good conditions for the first couple hours but after around 11:00 the conditions are gonna suck. My honest opinion if you can pick another day you should. We will be there tomorrow if you chose to go.
See you soon, Capt. Rob 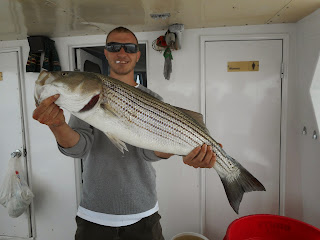